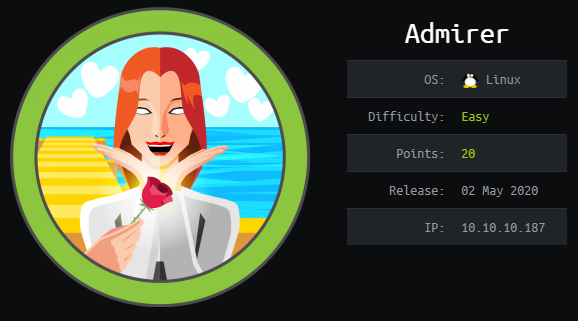 Welcome back everyone! Today we are going to be doing the Hack the Box machine Admirer. This machine is listed as Easy Linux machine. Let’s jump in!

Here are our results:

We don’t have that much to work with, so we’ll see what’s being hosted on port 80. We have a basic site. We check the source out and see the contact form isn’t functional. We know from our nmap scan that there is a directory called /admin-dir that we don’t want parsed by search engines. When we curl the robots.txt file we see there are potentially credentials inside.

We’ll kick off a gobuster scan to see what might in that directory as well.

I tried a few wordlists but this one yeilded the best results. We also didn’t thread this command because the box was so unstable. We get two hits after the scan completes. 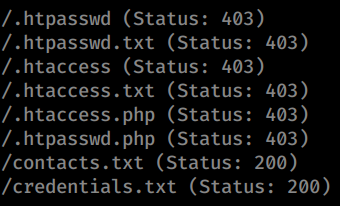 We download the credentials.txt and the contacts.txt to see what’s inside. Sure enough, we have credentials! Now we’re going to make two files, one for users and one for passwords and store them accordingly. Since we have the FTP port open, we’ll use the FTP credentials given to us and login.

We have two files listed here. We’ll issue a command to download them both.

With both files downloaded, we can start looking at what might be inside. The dump.sql file only has data for what seems to be the website. We can untar the html.tar.gz file and see what might be contained there.

This extracts and gives us a decent directory strucure. If you tree the directory, you’ll see it’s seems to be a backup of dev version of the current site. 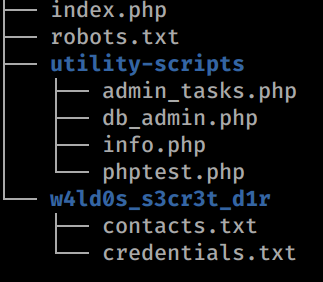 This is the portion of the site that we find the most usefull. If we look at this robots.txt we see it’s the same as the ’live’ version, with one minor difference. In the dev version of the site the /admin-dir is called w4ld0s_s3cr3t_d1r. If we try to go to /utility-scripts location on production, we see it is forbiden, so it does exsist. We look a the index.php file as well, and see some hardcoded credentials as well as a database name.

We’ll add these to our username and password lists and continue to enumerate. If we look at the db_admin.php page we see more credentials as well as an interesting note - "// TODO: Finish implementing this or find a better open source alternative". Now if we try to navigate to /db_admin.php we see it doesn’t exist. We can reasonably assume it has been replaced with an opensource tool. Some googling for ‘opensource db management’ led me to a list of the top 10. First on the list was a tool called Adminer.

From past CTF’s we have some web fuzzing wordlists, there are also some in seclists as well. This Github repo by Kaimi-io is really good in this situation. So naturally we use the adminer.txt list with gobuster and found /adminer.php.

When we navigate to the page we are greeted with the Adminer login page. 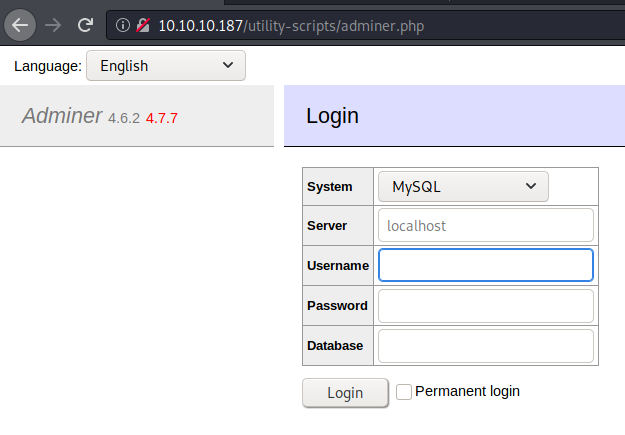 We try the credentials that we’ve gotten but none of them work. A quick google for ‘Adminer exploit’ and we get this . They were even kind enough to give us a video PoC!. Here’s what we need to do:

So first we start up mysql.

Now connect to the service and create a user and database.

Now that our user and DB is created we need to modify our Bind address for our server. If we don’t do this you will get Connection Refused from the Adminer.php page. Inside the 50-server.cnf file we can change this to our HTB issued IP:

Then we restart the service.

With that all complete we should be able to connect back to our system via the Adminer web interface.

Once we’re logged in we create a table inside our testdb.

Now we can run an the sql command to obtain data:

If that runs sucessfully, we should have the content of our index page in our newly created table.

Now when we look at the table we do indeed see the index.php loaded in. When we look further we see the credentials on the page are different than the ones we currently have.

We’ll add this to our list of credentials as well. We repeat the process for other pages but nothing else is of use. We have a fairly large list of users and passwords at this point. We can use Hydra to attempt to brute force our way into the box via SSH.

Sure enough we find a combo that works - Waldo:&<h5b~yK3F#{PaPB&dA}{H> We log in via SSH and get our user.txt flag! Now that we’re in, we need to enumerate internally. In this case we’ll copy over linPEAS and see what it shows. We see these two entries that are paticularly interesting:

If we look at the script admin_tasks.sh we see this line of code:

This file is being called and we have the ability to read the file as well. So let’s take a look at this script too. 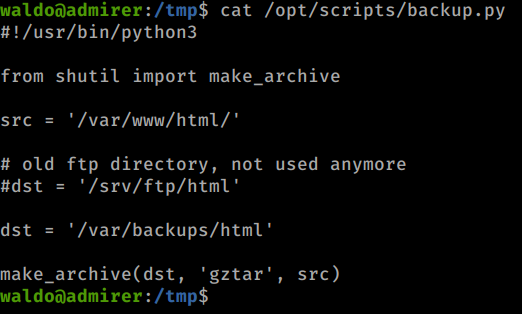 At first glance it might not seem obvious but when we piece together all three of our priviledges combined, we see the picture a bit more clearly. We can SETENV in our sudo command. We can call a script that runs another script as root. We can view the contents of a key script written in python. We’re going to leverage Python Path Hijacking or Python Module Hijacking .

We will tell the Linux system what our PYTHON path is. Then we’ll create a fake shutil.py library that gets called when we execute the script. Since the script runs that command as root, the script also runs as root, so we’ll copy the root flag somewhere else.

First lets make a new directory and set it as the PYTHON PATH.

With the following code:

There we have it, the root flag has been copied over!

Think about sending me some respect over on HTB if you enjoyed the write-up! Here’s my profile .