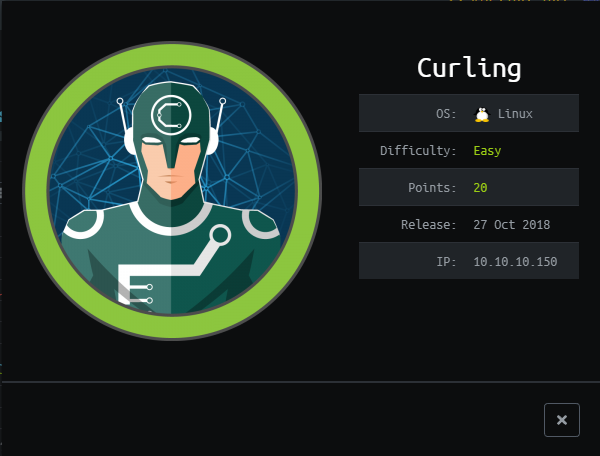 Welcome back friends! This post will be about the HtB machine Curling. This machine felt more CTF like than others. Another fairly simple box to gain the flags on but that’s what we expect from easier boxes. I should note that I’ve been posting about the easier boxes since they’re a better use of my time. I wish I had more time to dedicate to cracking some of the absurdly hard boxes but unfortunately, I don’t. It generally takes me 1-3 hours for an easy box & write-up. Lets dig in!

As always, we kick it off with our standard nmap scan:

Lets see what we get back:

Once that is done we will navigate to the error page in our browser and we should see our reverse listener light up. Sure enough we do! If you do take this route and you are on a public server cluster, you will inevitably spawn more Meterpreter shells as people land on the error page…

Now we can start an interactive shell session with sessions -i 1. We’re in! We run a few commands to see what we are working with.

Looks like we’re the www-data account. Lets take a look around. When we look at /home/ we only see one user home folder, floris.

Inside floris’ home folder we see very little a folder caled admin-area, password_backup file and user.txt. Lets try to cat user.txt and get the user flag! Operation failed damn. That would have been too easy. Lets try to navigate to admin-area, denied. Well, it does however look like I have read access to password_backup. Lets download that and see what it is.

Now we get to the fun part. We have a password_backup file. When we look at he file, its a hexdump. Lets rename it and move it into its own directory. 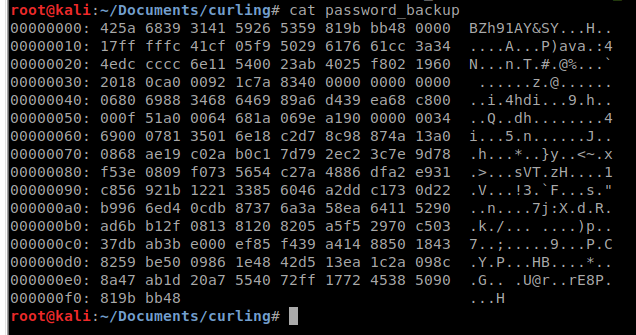 It seems to have a header of BZh91AY&SY which means its could be bzip file type. So lets try and recompile this hexdump. The tool hexdump wont do that for us but xxd will! We will issue xxd -r password_backup > recompiled.txt.

Now we should have an ascii file out, lets take a look. Looks like it still has a bzip header spacing. If we do a ‘file’ on it, we should see what type it is and sure enough its a bzip file.

Lets rerun the xxd command but specify it to be a bz2 output.

Now, lets try to unzip the file using bzip2, if we want to keep the file, we can issued the -k (not that I did that…).

We now have an unziped file called ‘decompiled’, lets check the file type of it.

Looks like a .gzip, lets give it the .gzip extension. now lets unzip it. Before we do that we’re going to rename the original decompiled file so we don’t get an overwrite error.

It gave us an output file of decompiled, this is why we needed to rename the original. When we look at the file we end up seeing its back to a .bz2 file. When we extract that file, we get an error as well as a .out file.

When we cat the file, we see some data that looks like some user ids and a potential password?

Lets check the file type, looks like its a .tar.

Lets rename and extract it. Finally, a password.txt file!

Now the password listed is indeed the same password we saw above however following through to a final file type was the goal here. Inside we find a password, presumably for floris since it was her backup file we took. So we have a user and a password. This machine did have SSH running on it, so lets try those credentials there.

Those credentials worked! Lets get our user flag:

Now that we have the user flag, lets get the root flag. This box was one of the scenarios where I over thought the entire process for WAY longer than I should have. I ran through potential exploits, RCE and wrote some code for custom enumeration. Turns out, I simply overlooked the key…

One of the first things you should do when you have a foothold on a machine is enumerate, enumerate and then enumerate some more. In this scenario, I did my enumeration but over looked one small task, the running cronjobs. When we take a look with ps aux, we see a key moment in time:

A cron job runs that calls a curl command using data from the ‘admin-area’ directory we saw earlier. When we look we have the -K which tells curl to use an input file and -o to give an output. So what we will try to do is modify this input file to get what we want. When we look at the contents of ‘input’ we see it’s pointing to a URL of the local host.

When we check the contents of the report file, we see the Joomla homepage. In this case we will change the local URL to point to /root/root.txt and have it output that content to the report!

When the curl job runs, we then get the password output to report! We have the root flag!