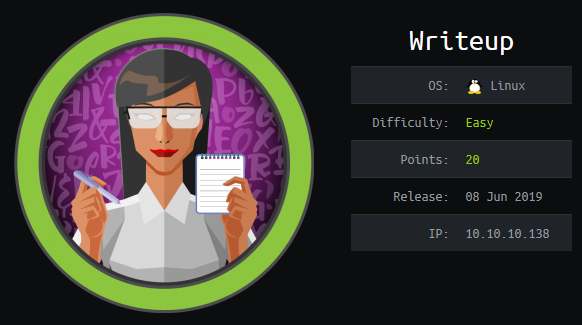 As always, the first thing we do is run our standard nmap scan:

We get back some pretty limited results:

So we head over to the port 80 and we are greeted with a basic page. 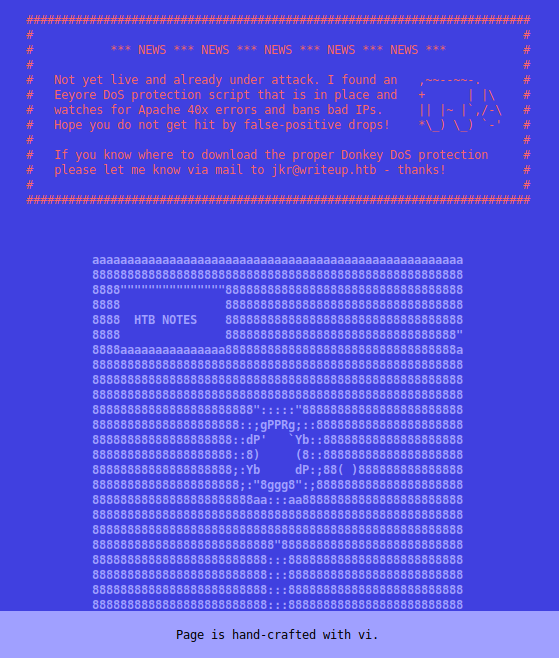 Well, write away we are told that error 40x series will be logged and banned. So this would rule out something like dirbuster. However, we try anyway! Sure enough, it does stop parsing after maybe 20 attempts. So we aren’t going to be enumerating that way. Our nmap scan did show us another directory called /writeup/, lets see what’s there.

Now we have a different page with some links. We see that there is a link to an external site and some linking to internal sites using PHP. Maybe we can break that functionality. When we take a peek at the code, we see that it’s running on CMS Made Simple. So we do some quick googling on the product and see what it’s all about. In my research I came across a SQL injection script on Packet Storm. Let’s give it a try. The first thing we do is copy paste the script into a .py file and save it. If we try to run it, we will get an error telling us we don’t have the termcolor library. Lets fix that quickly.

The first thing to do is install python-pip. This does come packaged with Kali but if you aren’t using Kali, you will want to run: apt install python-pip. Once we have pip operational we issue pip install termcolor. Now we should be able to run the script without error.

What we see is actually the salt found before in front of a some text. I’m willing to bet this is the password we want to be using. We can use the credentials we found and try and log into the admin page but that doesn’t work. So we can try to use them to log in via SSH and it works!

We land right in jkr’s user directory and snag the user.txt. Time to move onto root. As I was doing some basic moving around the box, I noticed that I could get to quite a few places. We’ll download LinEnum and see what comes back.

We get a bunch of usefull data back. In addition to this, we should also run PsPy for further enumeration. With these two combined hopefully we can find a crack in the wall. Using the same method as above, we’ll download pspy to the machine and run it.

We let it run for a little bit. Another thing we should also do is attempt to SSH back into the machine while this is running to see if it catches anything on login or logout of the sessions.

Now that we’ve enumerated a bit, and sift through the results we can pick out some things that are interesting.

One thing we notice is that on login / logout a pearl script is called to clean up the session. After we run LinEnum we also see that there is a cron job running run-parts to do some things for us. Our path also has some pretty wild path entries. I’m fairly confident we can use this to our advantage. The first thing we’re going to want to do is append our malious path location to the local path.

Next we’re going to create a small little script to copy the root flag to our malicous directory.

After that we’re going to make a few copies of it and put them in accessable paths.

These will get placed in the /usr/local/sbin/. Then when our cron job runs the run-parts from the prompt given, we will have our malicous script run instead.

Once the job runs, we get what we are after!

Now in this case, we could replace that shell code with a more malicous code, like a back door and backdoor as root rather than just copy paste the flag.

Another box down!Hopefully something was learned. If you found this write-up helpful, consider sending some respect my way: Lovecore&rsquo;s HTB Profile .